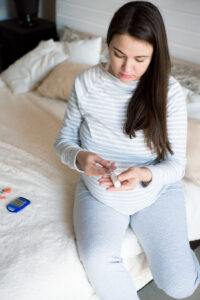 What is gestational diabetes?

Diabetes is a condition that prevents the body from using food properly. The body receives its major source of energy from a sugar known as glucose. Insulin, a hormone manufactured in the pancreas, must be available for glucose to be used in the tissues. During pregnancy, some of the hormones produced by the placenta have a blocking effect on insulin. Gestational diabetes occurs when the pancreas produces its maximum amount of insulin, yet that is not enough to overcome the effect of the placenta’s hormones.

What are the risk factors for gestational diabetes?

Gestational diabetes is more common in women who

How is gestational diabetes diagnosed?

What if I am diagnosed with gestational diabetes?

If you are diagnosed with gestational diabetes, you will work closely with one of our nurse practitioners to create an individualized food plan. You may have to limit some of the foods you love, or eat them in combination with other foods so that your blood sugar isn’t negatively affected. During pregnancy, you will have to manage your blood sugar so that it stays in the optimal range and reduces your risk for complications. Usually, this can be done through diet and exercise. You will also work closely with our physicians and may need additional testing to monitor the baby’s health and reduce the risk of complications throughout your pregnancy.

For most women, once the baby is delivered, gestational diabetes goes away. You will be tested again at your postpartum visit. If your diabetes hasn’t resolved, it is reclassified almost always as type II diabetes. Women who had gestational diabetes are at high risk of having diabetes later in life. Choosing to pursue a healthy lifestyle by eating nutritiously and exercising regularly may help prevent or postpone diabetes.